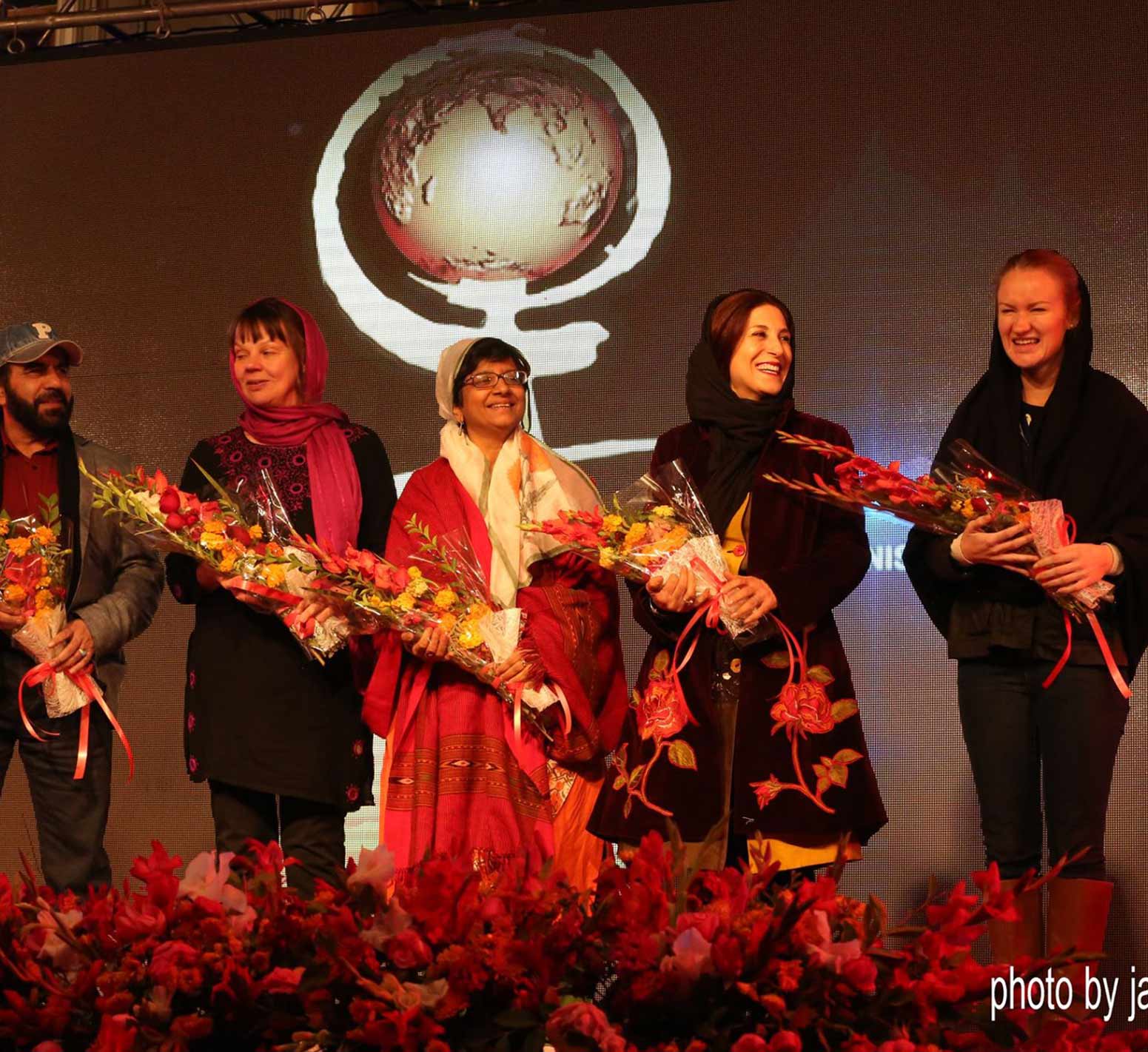 The 4th International Women’s Film Festival of Herat, Wednesday night, Oct. 28 / Oct. 1, 1395, October 19, 2016, was officially opened in Babur Garden of Kabul with the presence of artists, filmmakers, officials of national and international organizations and various people. This festival is held annually by the ARMAN / ARENA / ASIA Foundation and Dream Film House.
“We are struggling in a highly insecure and seductive atmosphere through knowledge and culture for our bright future and our children,” said Roya Sadat, director of the Dream Film House and co-founder of the festival, in an opening speech after welcoming guests. I believe deeply in cultural interaction to eliminate violence. We are in a world in which the fate of all of us is tied up, and in a world in which absolute human rights are inequality, and especially in my war-affected country, most women suffer from discrimination and inequality. In such a situation, in order for us to have a fair and prosperous fate, we have no choice but to talk between cultures and civilizations. Women and men, and all citizens of the world, must have equal access to universal facilities. Our contribution is not violence, our share is not inequality. Our contribution is not war. This whole world must know. We crossed the black carpet today to say protest and fighters.
Then Giso Jahangiri, head of the Arman Shahr Foundation / OPEN ASIA and other founder of the festival, began his lecture with the poem “God Almighty Grapes” from Elijah Alavi, and said: The International Women’s Film Festival of Herat in the last three years in the historic citadel Hazrat al-Din Herat, a city without cinema and jewelry in the heart of Asia, which has hosted two thousand years. We are very pleased that we were able to raise women’s problems and problems through the creation of a modern solution. There are no borders for us artists, human rights defenders, women and men from culture and humanity. But the dark minds have created borders. We are women guarding peace and talking to Mr. Ghani, the president, who said: “Women’s rights are uncompromising.” Referring to the legend of Simorgh Attar, he said: “We are our own women, we are not victims, we are fighting and acting.”
The first lady of Afghanistan’s message, Rola Ghani, spoke to the festival for her presence at the Sharjah conference, press consultant and public relations, Ms. Zohre Youssef. The report read: “Women are sensitive storytellers who accurately describe the details of the events, and the art of cinema is a good way of expressing their emotions.” Ms. Ghani thanked the Arman Shahr Foundation and Roya Dream House for organizing the festival, urging them to focus their efforts on the political situation in the country today in order to create a sense of belonging, patriotism and respect for Afghan values and culture for the younger generation. Draw an allegory.

Minister of Women’s Affairs, Delbar Nazari, was also featured in his message to the festival: We are pleased that the festival, with 200 films from domestic and foreign productions, most of them focusing on women’s status, are masculine in the art of the seventh , Cinema, in Afghanistan. The glad tidings of saving this interesting adventure in the direction of changing the patriarchal culture to the enlightener are upright audible and admirable.
Ms. Delbar Nazari, criticizing the stereotypical and incapable stereotypical presentation of women who need generous contributions, said: Afghan women’s talents are not yet depicted. We proudly announce among the Afghan women who called them black guy and now we have the best generals, ministers, lawyers, governors, bosses, ambassadors, pilots, doctors, artists and more. We demand the active participation of women in screenwriting, directing, producing, and managing decisions.
The jury then went on stage and was introduced to the audience: Ana Teres Dee, an independent journalist, member of the Board of Directors of Front Line Institute of Registry, representing free journalists in conflict areas. Fatemeh Motamed Aria, a protagonist at the festival Various international organizations such as Torino (Italy), Weswell (France), Cairo (Egypt), Delhi (India), … has been a member of the Jury. Film director and screenwriter Smirth Nouathia led the six film festivals, including Men and Sons for Gender Equality (IAWRT). Kiriši Mathela, a Finnish filmmaker and director, received the Best Human Rights Film Award from the movie “Marzieh, My Friend” at the 2015 Gallowi Film Festival in connection with Amnesty International. Homayoun Fall, author, director and actress of Afghanistan has been writing and directing 14 short films in his work and has received several international awards.
In the opening ceremony of the festival, the statue of the 4th International Herald Film Festival of Herat was awarded to Ms. Rakhshan Bani Etemad for the works. Rakhshandeh Rakhshan Bani Etemad is a director, screenwriter and producer of Iranian films that has produced dozens of documentary and fiction films from 1363 to 1394. Her films have been praised at international and Iranian festivals and received numerous awards. He has participated in many festivals in Iran and other countries, including the Fajr Film Festival (three courses), Turin (Italy), Delhi (India), Locarno (Switzerland), Montreal (Canada), Festival Asian Rome (Italy), Cairo (Egypt) and ….
In this festival, in the past years, Zia, a women’s rights activist, suffered a lifetime of unscrupulous service for women due to her outstanding activities on gender equality, serving the Afghan human rights community. The land and the quest for peace were commended. Then she was honored by Ms. Aqul Rezaie for her continued presence in the field of cinematic activities and the breakdown of gendered taboos and the display of a dynamic image of women in Afghanistan. And lastly Mahnaz Afshar, an actor and special guest, was praised for two decades of acting in the arena and a dynamic presentation of female artists. He has received several awards and honors at the festivals.

Mahnaz Afshar referred to cinema as a tool to change women out of isolation and said: “War, insecurity and the rise of fundamentalism in the Middle East are double injustice, and its increasing growth strikes women more than anything else and equals one another.” Zend We have to think about ways in which Iranian and Afghan filmmakers and conscious men and women can use common language, history and culture, and work for culture and the fight against inequality and xenophobia. He said at the end, “I salute your Afghan my compatriots and give them your greetings.”
The end of the Molan Khanavi opening program was accompanied by traditional Afghan music.
This year’s festival hosts more than 200 films from around the world, featuring about 60 selected short, long, documentary and animated short films from different countries (Afghanistan, India, Myanmar, Turkey, France, Egypt, Italy, Britain, Bielim, Iran, Russia , USA, Lebanon, Vietnam, China, Bangladesh, Kazakhstan, Germany, Portugal, Korea and …) will be screened at the festivals in the Babur Garden and the Family Cinema of the Galaxy, and a panel of judges composed of film actors and women’s rights activists From the countries of Afghanistan, India, Iran, the United States and Ireland, the statue and awards will be awarded to selected films. Will be.
The Women’s Herat International Women’s Film Festival is the first women’s film festival in the region, hosting nearly 1,000 films from around the world in the past three rounds. 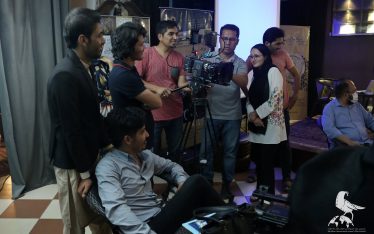 workshop 2020
A very special 8 day-cinematography workshop as a part of the 6th Edition of Herat International Women’s Film Festival (HIWFF 2020) leading by Reza Didar DP and Cinematographer kicked off...
LikesLeave a comment 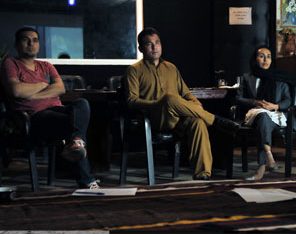 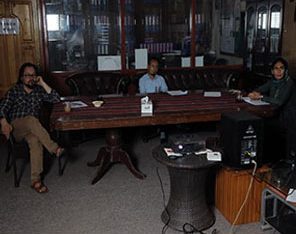