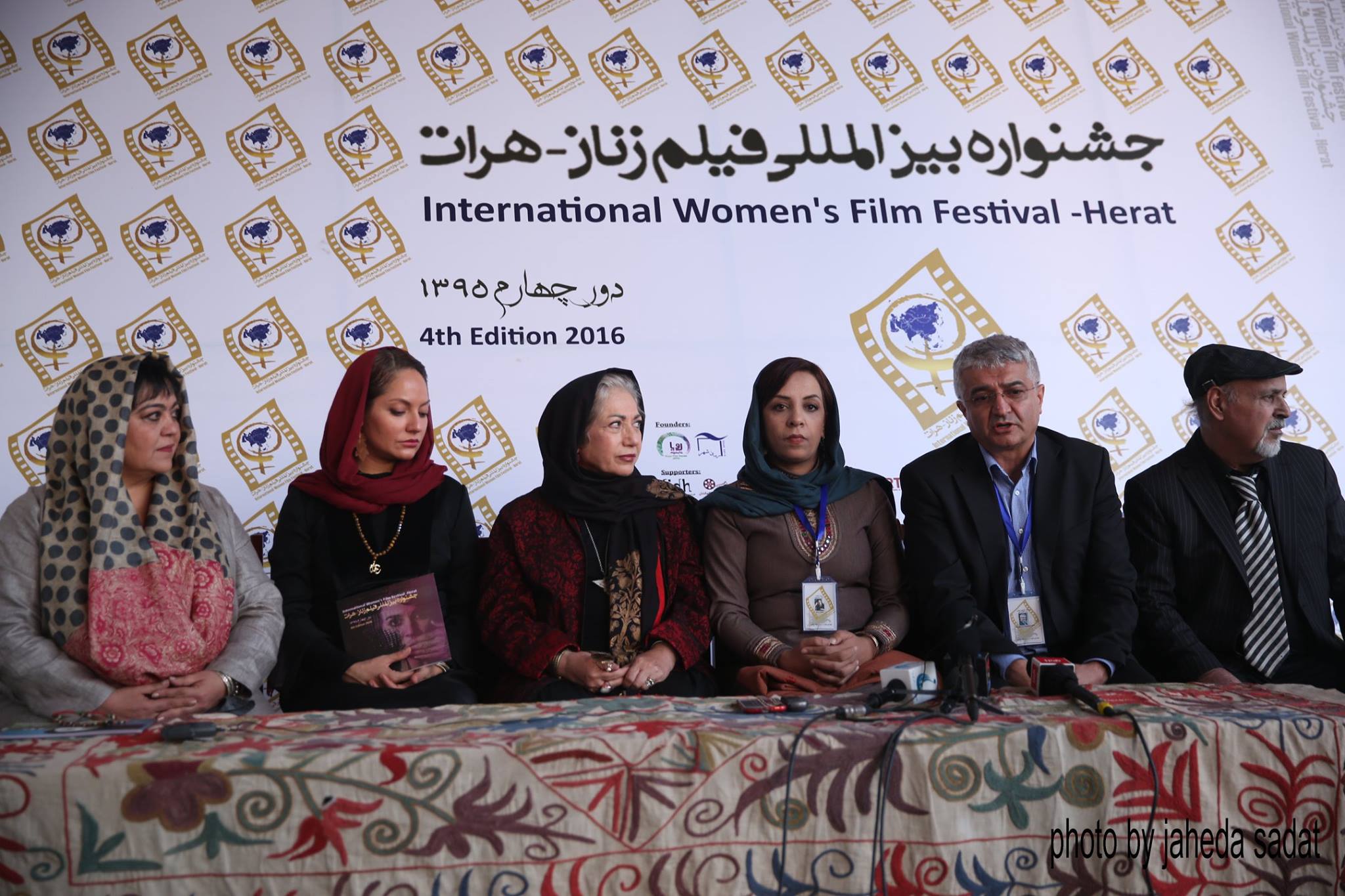 Fourth edition of the “International Women’s Film Festival – Herat” officially opened at Gardens of Babur, in Kabul on Wednesday 19 October 2016 with participation of artists, filmmakers, officials of the national and international organisations and people from different walks of life. Armanshahr Foundation/OPEN ASIA and Roya Film House, founders of the festival, organise the festival annually.

Roya Sadat, President of Roya Film House and a co-founder of the festival, welcomed the guests in her opening speech and said: We are endeavouring for a bright future for ourselves and our children by means of knowledge and culture, within an extremely insecure and repressive environment. I believe deeply in cultural interaction in order to abolish violence. We are living in a world, where the fates of all human beings are intertwined. In a world, and in particular in my country, where humans live under absolute inequality of rights, women suffer discrimination and inequality most. Under such circumstances, we have no choice other than dialogue between cultures and civilisations, in order to achieve a fair and prosperous fate. We do not deserve violence, we do not deserve inequality, we do not deserve war. The whole world must realise this. We walked over a black carpet today to say that we protest and fight.

Guissou Jahangiri, President of Armanshahr Foundation/OPEN ASIA and the other co-founder of the festival, began her speech by reciting a poem from Elias Alawi “I pray to God for grapes to ripen.” She said: In the past three years, the International Women’s Film Festival – Herat was organised in the ancient citadel of Herat; a city without a cinema and a pearl at the heart of Asia, which has hosted the powerful for two thousand years. We are pleased that we were able to bring the problems and grievances of women to the fore by means of a modern mechanism. There are no frontiers for us artists, human rights defenders, men and women of culture and humanists. The advocates of darkness, however, have established frontiers. We women are protectors of peace. I recall President Ghani’s remarks: “Women’s rights are irreconcilable.” Alluding to the fable of Simorgh (thirty wise birds), she said: “We women are the Simorgh. We are not victims, we are militants and activists.”

The message of Afghanistan’s First Lady Rula Ghani – who was away at a conference in Sharjah – was read out by her press and public relations advisor Ms. Zuhra Yussef. She said: Women are sensitive and precise observers, who are good narrators of events. Cinema is a proper means for them to narrate their emotions. Ms. Ghani thanked the festival organisers Armanshahr Foundation/OPEN ASIA and Roya Film House, and asked them to concentrate on films that symbolise the senses of belonging, patriotism and respect for Afghan values and culture for the young generation under the present political conditions.

Minister of Women’s Affairs Ms. Delbar Nazari stated in her message to the festival: We are pleased to see that this festival is questioning the maleness of the cinema in Afghanistan by offering 200 domestic and foreign films, most of which deal with women’s conditions. This interesting offer promises to change the culture of patriarchy.

Ms. Delbar Nazari criticised the stereotype image of weak women who are in need of generous aid, saying: The capabilities of Afghan women have not yet been put in picture. We are proud to say that among the same Afghan women who were called desperate black-heads, we now have the best generals, ministers, MPs, governors, ambassadors, pilots, doctors, artists and others. We demand women’s active participation in script writing, directing, production, and management decisions.

Next, the Jury members went on stage and were introduced to the audience: Anna Therese Day is an independent journalist, a founding board member of The Frontline Freelance Register, a representative body for freelance conflict journalists. Fatemeh Motamed-Arya, the veteran actress, has been a member of Jury in various film festivals including: Turin (Italy), Vesovel (France), Cairo (Egypt), Delhi (India) and others. Smriti Nevatia has been curator of six film festivals including the Men and Boys for Gender Justice Film Festival for the MenEngage Global Symposium on Masculinities (IAWRT India). Kirsi Mattila, Finnish scriptwriter and director, won the Best Human Rights Feature award presented in association with Amnesty International for her film “Marzia, My Friend” at the Galway Film Festival in 2015. Homayoun Paiez, Afghan writer, director and actor, has written and directed 14 short films and has been awarded several international prizes.

Ms. Rakhshan Banietemad was awarded the Special Statute of the 4th International Women’s Film Festival – Herat for collection of her works. Rakhshandeh “Rakhshan” Banietemad, the Iranian director, scriptwriter and producer, has made scores of documentary and feature films since 1984. Her films have been praised in Iranian and international festivals and received many awards. She has been a member or president of the Jury in many festivals in Iran or other countries, including Fajr (three times), Turin (Italy), New delhi (India), Locarno (Switzerland), Montreal (Canada), Asian Festival of Rome (Italy), Cairo (Egypt) and others.

The festival praised Mr. Zia Moballegh, women’s rights activist, for his remarkable activities in favour of gender equality, service to the human rights community in Afghanistan, life-time activities at the service of the suffering women of this land, and his endeavours for peace. Ms. Aqeela Rezai was praised for her persistent presence in different spheres of cinema, breaking gender taboos and presenting a dynamic image of Afghanistan’s women. Finally, Ms. Mahnaz Afshar, actress and special guest of the festival, was praised for two decades of acting and presenting a dynamic image of female artists. She has received other awards and praises in different festivals.

In her speech, Mahnaz Afshar referred to cinema as a tool to bring women out of isolation and said: War, insecurity and growth of fundamentalism in the Middle East are a dual oppression. Their increasing growth is a blow, above all, to women and equality seekers. We must think of a way to enable the Iranian and Afghan filmmakers and conscientious men and women to employ a common language, history and culture; we must endeavour toward culture-building, fight inequality and misogyny. In conclusion, she said: I bring greetings from my Afghan compatriots and I shall take back your greetings to them.

The ceremony came to a conclusion by a recitations from Mowlavi, accompanied with traditional music of Afghanistan.

The 2016 festival is host to more than 200 films from various countries across the world. Around 60 selected short, feature, documentary and animation films from Afghanistan, India, Myanmar, Turkey, France, Egypt, Italy, Britain, Belgium, Iran, Russia, the US, the Lebanon, Vietnam, China, Bangladesh, Kazakhstan, Germany, Portugal, Korea and others shall be screened at Gardens of Babur and Kahkashan Cinema. A Jury consisting of filmmakers and women’s rights activists from Afghanistan, India, Iran, the US and Ireland shall award the festival’s statute and Tablet of Appreciation to selected films.

The International Women’s Film Festival – Herat is the first women’s film festival in the region and has hosted around 1,000 films during its previous three editions. 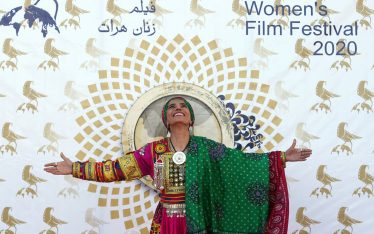 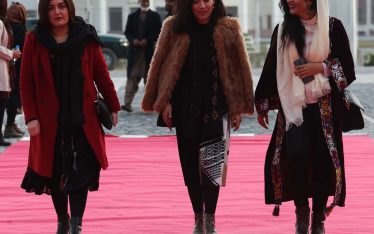 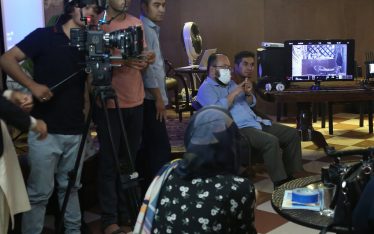